Today Intellecta Corporate presented the results of their Twitter Census. The first time a systematic analysis of Twitter use in Sweden has been performed. During December 2010, Over a million Twitter accounts were analysed and over twenty million tweets. Leading to a figure of 91316 Swedish Twitter accounts. 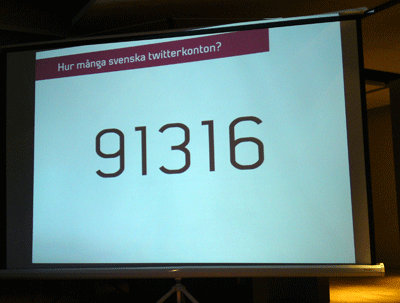 It’s not completely straight forward to ascertain what country a Twitter account is associated with. The location details on people’s profiles is not compulsory and not filled in by many (or made up).

The survey chose to study the language people tweeted in. If you tweeted at least once in Swedish during a 30 day period in November/December 2010, then you were flagged as Swedish.

The language was detected using two tools – a PHP class, and then cloud-sourced manual check if the confidence level of the machine generated result was inconslusive.

Once an account was deemed to be Swedish, all of the followers of that account were added to a queue to be processed. This was repeated until no new twitter accounts were discovered.

So who gets missed?

This technique doesn’t capture every single person who we (humans) would associate with Sweden. Obviously it misses out anyone who only tweets in another language than Swedish.

It also excludes people who are passive readers and those who have protected their tweets (some 10% of all accounts analysed). At the same time it includes auto-tweeting accounts, multiple-accounts, and companies.

11215 are very active on Twitter. On average at least one tweet a day during December 2010. These eleven thousand accounts (6% of Swedish accounts) generate 68% of the tweets. The other way round, the figured are almost mirrored – 6% tweets are generated by 70% of accounts.

But what about Reach?

As I mentioned earlier, these figures say nothing about the reach of Twitter in Sweden – that is to say the number of people reading tweets. We have no idea how many of the non-active 54000 read Tweets in some form nevertheless.

This doesn’t mean that Twitter isn’t useful, and it doesn’t mean you can dismiss it as a channel here in Sweden just because there are only 36000 active accounts.

Hampus mentioned after the presentation that there are, it would seem, a number of different, largely unconnected, communities. There are groups of people (including very active users) who follow quite separate sets of people to other groups of Twitter users.

There was no analysis or data offered regarding this point, but as a personal observation I’ve noticed communities for web, politics, media/PR, and celebrities. Some (sub)communities on Twitter have a lot more reach than others.

Twitter is what you make it. It’s reach and importance depends not only on how active you are, but also the subject area you focus on – and how active the Twitter community surrounding that topic is.

The survey has produced some fascinating figures, and raises more questions than it answers. Twitter is not a tool used by the masses, but it’s clearly an important tool in certain communities. It’s not time to bury the whale just yet.

A PDF of Intellecta’s report is available here.