Stockholm Public Transport (Commonly known as SL) launched a new, responsive, website in May 2014. As is often the case with redesigned sites, it has received a fair amount of criticism.

Between May 15th and 17th, UXLx 2013 takes center stage for me. This will be the third consecutive User Experience Lisbon conference that I’ve attended. The first 2 were increadibly inspiring, tiring, and great fun. I’ve obviously got similar expectations for this year too.

We all end up being “damaged” in the end. Some might call it “Senior” or “Experienced”, but eventually most of us end up seeing work-related issues in everything around us.

I can’t use a website without noticing something that could be improved. Actually, it’s rare I use a website and don’t end up giving my poor wife a mini-lecture on UX or usability. Poor thing.

It doesn’t stop with websites. Most of us who work with producing or optimising digital products and services have a “spidey sense” that tingles constantly. Usually with websites, but just as often it could be a coffee machine, a sign, a door, an entire restaurant – any process or interaction is fair game for our enhanced senses.

We’re constantly optimising what we see.

I went skiing recently at Kungsberget in Sweden. Nice resort that’s a convenient two hours drive or so from Stockholm.

As usual on arrival I needed to sort out ski-hire for the family. We hadn’t pre-booked (my irritation with the web-based booking system would be a blog post of its own) so we needed to queue.

Sweden is the motherland of queueing systems. Swedes are pretty much born with the instinct to look for a little machine in shops and service centres that dispense a little paper ticket with a number on.

Somewhere else in the store they’ll be a display showing a number (or several numbers…) indicating who’s next in line.

The ski-hire shop at Kungsberget, naturally, has a ticket-based queueing system.

But just where do I take a ticket from?

The thing is, it’s hidden. Or rather, it’s not optimised… Once I’d worked out where to get a queueing number from, I hung about for 20 minutes or so waiting for my turn. During that time, everyone – yes, pretty much everyone – did the same as I’d done when I’d arrived.

Walk in. Scan the entire building looking for the dispenser. Fail to find it. Walk up to the counter and ask someone working there where it is. Then they reeled off the same sentence that they’ve probably used thousands of times just this season.

“It’s on the wall outside”.

Ah, the ticket machine is before you even enter the ski-hire shop. Someone probably thought this was a smart way of keeping people outside and out of the way rather than clogging up the small space inside.

There are several problems with this. The first issue was that when I was approaching the ski-hire shop, my goal was to locate the place for hiring skis. I was scanning and hunting for signs that confirmed that the building was the correct building.

The ski-hire shop was helpfully decorated by a large sign (the most prominent sign on the building) saying exactly what it was. There was then a large (attempting to be helpful) sign on the door saying “entrance”.

It’s only once inside that my attention turned to finding a ticket dispenser. (Because I’m Swedish enough to know that’s how queueing works…). The process though has been designed to work the other way round.

Outside, above the hole in the wall where you could press a button to get a ticket, there was an A4 paper sign with a few words in a relatively small font-size and an arrow pointing downwards to the machine below.

All very low key and a few meters to the left of the nearest entrance. The machine was invisible to me – it suffered from banner blindness. There were other visual signals that were stronger, more relevant, and in the expected palaces.

If the machine is going to be placed outside (which knowing how crowded these places can get it was certainly an idea with good intentions) then we, as users, need to be more effectively marshaled into finding it and using it.

The fun thing to do would be to work with them and do some A/B testing. To test different combinations of signage and positioning. Test moving the machine, test putting the “next number” display outside near the ticket machine, etc.

We can then evaluate it all by counting how many times the staff at the ski-hire have to explain to customers where to find the ticket dispenser.

Digital or otherwise, our job is to make sure people can do what they need to do to reach their goal. Digital, analogue, or cross channel. It’s still us, the humble human, that’s central to it all.

James Royal-Lawson+ is a digital strategist, UX-er and optimiser based in Stockholm Sweden.

There is no universal definition of UX. Almost everyone has their own idea of what it means and what it encompasses.

A lot of the time we talk about UX as an umbrella term for a wide range of tasks and specialist areas. 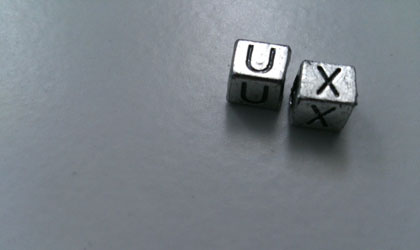 If you take a look at “UX” job postings, you’ll probably be led to believe that the role “UX Designer” is synonymous with “Interaction designer” or just a producer of wireframes.

There are some aspects of UX that everyone agrees on. At the very least, the (digital) user experience is everything you come into contact with on your screen and how it makes you feel.

In episode 36 of UX Podcast, Per and I turn our attention to the term “UX” and it’s misconceptions. Can it be defined? Can you be a “UX-er”? Is the phrase “UX” needed or are we just unnecessarily complicating things?

I said during the show that User Experience isn’t, and can’t be, an occupation. It’s a topic rather than a task, but it’s a topic that many of us are passionate about.

We really do believe in making great user experiences (and happy companies as a consequence!)… and we all have our toolboxes of tools to help us achieve that.

What we can’t get away from is that the user experience is fundamentally technical. You can’t craft a digital service to deliver a fantastic user experience without also scoring high on the technical side.

You can have a huge amount of insight into user behaviour. You can have walls filled with effect maps, wireframes and personas.

But unless you piece it all together with the right technical glue, you’re going to under-deliver and end up with an expensive and sub-optimal user experience.

Page speed/Performance, SEO, back-end, front-end, accessibility, usability, interaction, design, information architecture, content, branding… any of these and more can trip up your well considered UX in an instant.

With the diversity (and multitude) of roles involved, plus the complexity of what we are producing, the UX-er – if it’s going to be an occupation – should be a silo-crossing hand holder.

A constant hand-holding role that remains present from start to finish (from research to deployment), making sure the pieces are all put together as expected and not just a a box that’s ticked when someone’s signed-off on a bunch of wireframes.

Grab my hand! It’s going to be a bumpy ride…

James Royal-Lawson+ is a freelance UX-er, hand-holder, and web manager based in Stockholm Sweden.

No website is perfect. It’s not going to be. The pace of change within digital media is far too fast for us to reach perfection. We can though make them more effective.

Testing and tweaking. That’s how you can improve your website. Adjusting and improving. Optimising what you’ve got.

A wise man said to me that you should aim to increase the conversion rate of your website every single month. A good goal to keep things moving.

The way in which you can improve your website is quite straightforward. There are four areas of website optimisation you should focus on.

The four focus areas of optimisation are:

Everyone working with digital media and e-commerce is aware of Search Engine Optimisation. Often “optimisation” is taken to mean SEO and nothing else.

Many companies have spent a fair bit of cash over the years paying for SEO and SEM services to drive more traffic to their websites.

Increasing (relevant) traffic to your website is almost always a good thing. Unfortunately, if you’re site has poor usability or is sluggish due to poor web performance then you’ve got untapped potential.

The best way to free untapped potential is to turn your attention to your website. A good starting point is a website review.

Start with web performance optimisation – in plain English, we’re talking about page speed. How fast the page loads and responds for your visitors in the context they use your site.

For some this context might be sat at a desktop computer connected to the internet via a high speed connections. For others it could be via a mobile telephone whilst in a moving vehicle.

We need to help convince them that your page is the one they should click on amongst all the others.

Your website needs to be usable. Visitors need to be able to complete their tasks without falling over as if their shoes have been tied together. Optimising the usability of your site is your way of untying them.

The most basic (and critical) usability issues can be pinpointed quite easily. But you learn the most by testing and then analysing the behaviour of real visitors to your site. They are the ones trying to use it, not you. It’s their behaviour that counts.

Once you’ve worked our way through these three areas of optimisation, it’s time to set your focus on CRO – Conversion rate optimisation.

This is where we look at the goals of your site and the steps a visitor goes through reach them and try to make sure the highest number of people possible make it all the way to the end.

Although usability and conversion optimisation are intrinsically related and overlapping, they are different.

You could say – Usability is making sure that it’s possible for visitors to complete their tasks. Conversion optimisation is giving them the right nudges to make sure they actually do.

I’ve laid out these four areas of optimisation for you in a specific order, but you can switch the order around or run the whole lot in parallel. It’s just a matter of resources and a bit of planning!

All-in-all we’re optimising the user experience. I could have sliced this up in a few difference ways, but all-in-all if we create high quality digital experiences, both the customer and your business will be as happy as the cat who got the cream.

Take the first step in optimising your digital business: check out my website review and audit service.

How can I improve my website? Here's how you can start: http://t.co/52G7XKDE

James Royal-Lawson+ is a digital strategist, web manager and optimiser based in Stockholm Sweden.