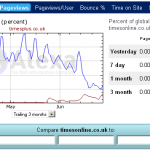 An Alexia graph showing pageviews for The Times (and timesplus; their paywall). Not difficult to see the day they raised the paywall. Facebook’s sustained growth is staggering. Mashable have made some calculations based on various available figures. At an estimated 500,000 new users per day it must be by far the fastest growing user-base the Internet has ever seen.

Although impressive, such growth rates must be a technical nightmare. Scaling Facebook to cope will certainly be giving plenty of Facebook people grey hairs.