So, if you aren’t active on Twitter – or you simply don’t have time to keep up with the incredible pace of the real time web – then take a look at these papers. Bookmark the ones you find useful, add an alert for the ones you really don’t want to miss – and if you’re a Twitter user, log in and create a few of your own.

I’ve spent a little bit of time trying to make these newspapers relevant and on topic. A bit of digital curation if you will.

Included in the list is a bonus paper from Jens Wedin – The UX Daily featuring articles about user experience.

A Weekly newspaper created from an advanced Twitter search in order to pick up all eye tracking related tweets.

Another paper based on an advanced Twitter search, this paper gives you a daily digest of articles about QR Codes. Great source of example and inspiration for using barcodes.

A bonus paper – Created by Jens Wedin and features articles about user experience design. This too is a paper with focus and a high relevancy rate.

Enjoy the newspapers! Have you created a useful Paper.li newspaper? Let me know about it in the comments below.

A great “briefing paper” from Six Revisions, intending to raise awareness of the discipline with designers.

The latest Alertbox post covers what users think they know and how that affects their behaviour. Users, designers and developers all have differing mental models. You need to work with conformity not against it, and gently adjust the mental models of your visitors and users.

If every website followed the ten points in this list, i’d suddenly have hardly anything to complain about any more. Well, perhaps not *hardly* anything – more like “less”.

Yammer boasts that 80% of the Fortune 500 use Yammer. I wonder how many of those 400 companies have adopted Yammer as their official, or main, collaboration platform?

How I learnt to stop worrying and love enterprise microblogging

I’m really enjoying Kristian’s series of posts about aspects of his work over the last couple with the intranet at Region Västra Götland. This particular post goes into the details of how they’ve tried to deal with managing URLs and links across multiple systems.

How we improved our intranet search experience

Luke describes how they implemented and tweaked their Intranet search (using a Google Search Appliance). Some good lessons-learned and insights that anyone dealing with intranet search can make use of.

Report: iPad Is an Enterprise IT Triple-Threat

The headline talks about iPad (and thereby iSO) but the report concludes that Android and HTML5 should also be prioritised. I’m going one step further than Forrester and saying prioritise HTML5 and Android. Plan for mobile/wireless working and plan soon.

An insight into how Google tests it’s products (before launch in this case). What I find interesting is that normally Google uses eye tracking whilst testing. It gives them real data to work with. In this case, Google Instant, they chose not to. Why? I suspect they did try, but realised that far too many people were spending too much time looking down at the keyboard whilst typing – and not looking at their instantly-changing search results.

Some useful testing into how Facebook decides what to display into your news feed. Would be interested though to know their source for saying “Top News is how a vast majority of Facebook users get their information”

A good list to help you separate the wheat from the chaff in the world of social media consulting. You don’t need to hold yourself religiously to all 20 points, but there is some really good, honest, to-the-point advice in Pam Moore’s post.

How Google dominates the Web

If you had any doubts about just how dominant Google are in our World of Web Stuff, then this Royal Pingdom posts shows you the stats in easy to consume pie-charts.

The featured tool in this article is Yammer, but the tactics and principles described are valid for whatever intranet collaboration tool you are rolling out. Three critical tactics according to Hanesbrands: Gain leadership support, Partner early with IT, Help employees use the platform & see value. 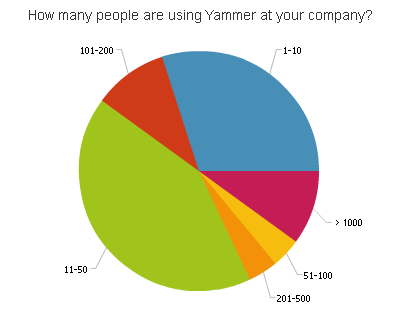 Day one featured Presentations in English, day two in Swedish – but almost all of the tweets from both days were in English, which was wonderfully considerate of those attending.

Here, collected together in one document published on Scribd, are all 325 tweets by 101 people from the morning of the 5th of October until Sunday the 10th. There were a number of post-conference blog posts and articles, so I included the 4 days after the conference.

In one of my last tweets from the 5th, I summarised the first day of the conference with these few words: task-based, people focused & mobile.