QR codes aren’t all about campaigns and coupons. They can quite easily be used to add value and to help customers/readers/visitors do what they’d like to to. I’m going to give you an example of how they can help improve sharing of printed articles.

Despite the looming figure of Death hanging over their shoulders, traditional printed newspapers are long from their EOL. That said, the way in which we consume media is developing all the time. I read most content digitally, through a web browser (on my laptop and my tablet) or via an app (on my tablet).

I regularly share the links to content I consume, often adding my own little comment and opinion. The channels I use to share are varied, but mainly Twitter, Facebook and Yammer – and myself (somethings have to be saved to be read later – there are only so many hours in the day!)

Despite my digital life, I still have a fondness for printed newspapers and magazines. That said, the number of publications I subscribe to has reduced dramatically over recent years, but one that has remained is The Economist. I enjoy it’s stability and consistency. A 15 year-old James wouldn’t be shocked at how the present-day Economist of 38 year-old James looks.

What is frustrating is that I still have the same urge to share when I’m reading the paper version as I do when reading articles digitally.

This is where QR codes could add real value for me.

So why not add share buttons to printed articles? Okay, it’s obviously not possible to put actual sharing tools in printed paper, but it is possible to print a scannable barcode alongside the article.

Rather than have direct link to the digital version of the article encode in the code, why not take one step further in helping the reader and provide a link to a ready made sharing page?

I’ve taken the Wikipedia page for How to win friends and influence people and made it into an example document. In the footer of each page I’ve placed a QR Code. This code links to a simple share-page that I’ve made. (It would be sensible to include some indications of what the QR code does when scanned – I’ll update the example document later to include that.)

Scanning the barcode takes you to a share page that shows the article title and then offers a number of easy to press links enabling you to share the article on Twitter, Facebook or via email. Or if you fancy – you can even be a little crazy and open up the actual web page. 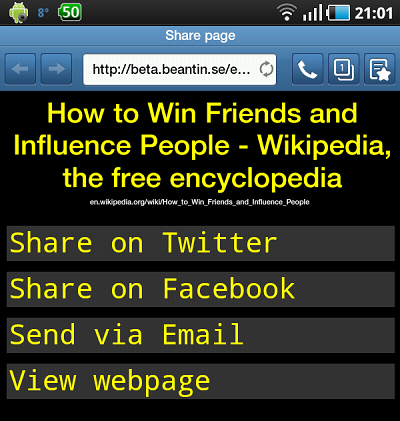 If The Economist printed a little QR code at the end of each article, I’d share plenty more articles with my friends and followers than I currently do.

If you produce a printed publication, why not try it out? My share page is just a simple example, but it would be relatively easy (and low-cost) to produce a branded, slightly more advanced, version. Producing the QR codes is straight forward, and even possible to automate.

Let me know how you get on!