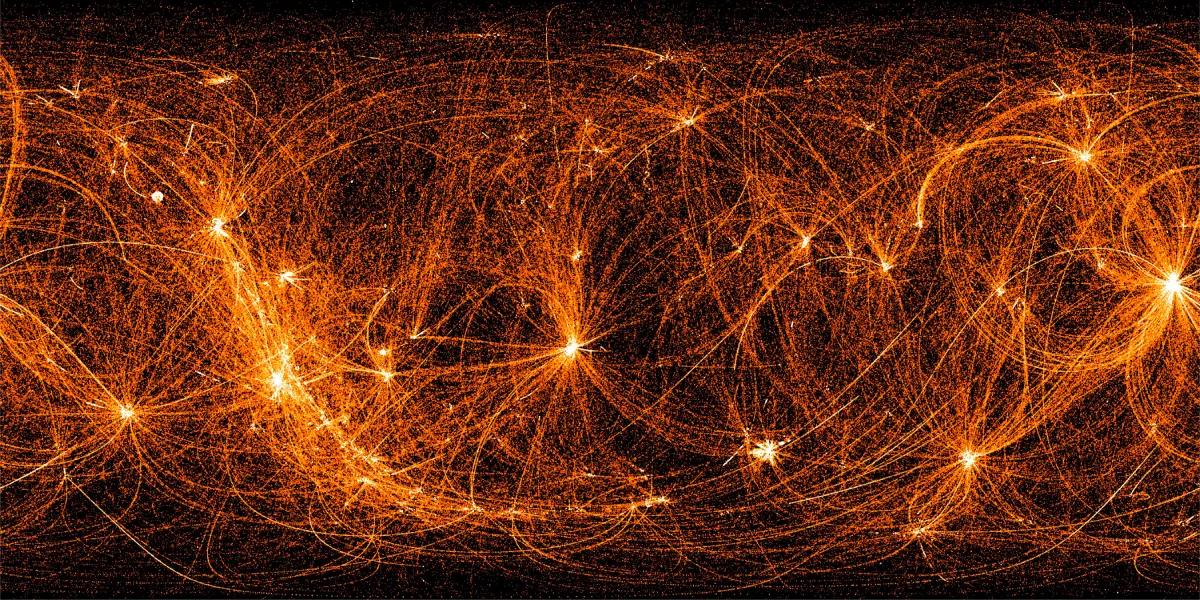 In this article, I build on Stephen Anderson’s thoughts about customer journeys and how we work with them as designers. I expand on the ALT-X model Stephen (and Erik Flowers) presented, and suggest some adjustments, from an economics viewpoint.

Most of the time, I don’t need much of a nudge to start me thinking, but nevertheless, some people set me going more than others 🙂 Over the years, I’ve found that Stephen Anderson is one such person. Stephen has time and time again provided me with pieces of information that have engaged my thinking process and set me off on a journey of thought.

Last week, it was nudged into thought again.

Straight away, I was intrigued. In part, I was intrigued by the idea that Stephen had a list of articles that he annually re-read. It turned out he didn’t – but yeah, I like that idea. But we’ll park that. I’ll save that for another day.

It was the frustration with journey mapping that intrigued me most.

“I’ve always felt weird about using customer journeys for an experience where we have dozens or hundreds of moments whose linear sequence and/or usage is wildly different for many users.”

The strict linear nature of journey mapping has always bothered me. I love the process of producing a journey map; especially as team-work. What I like much less is the fact that the process forces a linear sequence to appear. A golden path. The expected path.

But our paths are rarely linear.

When I’m teaching user experience designers how to use analytics in their research, I often show them how messy people’s journeys are through websites. We can use the analytics data to validate how “right” our journey maps were and to surface variations; to help show the messy truth. 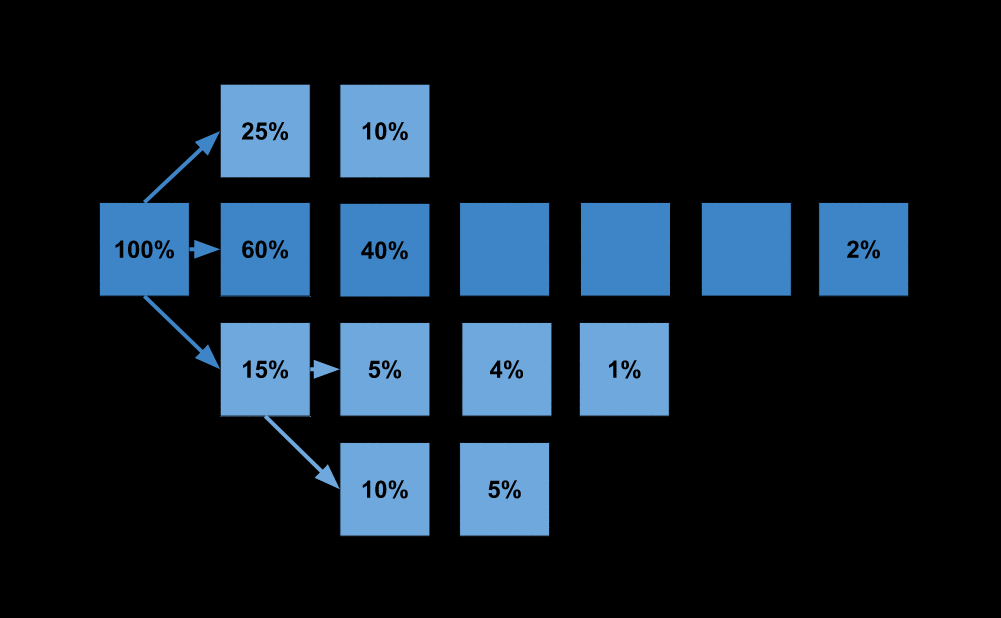 The article that Stephen was teasing us in his tweet, When Customer Journeys Don’t Work: Arcs, Loops, & Terrain, is built on thoughts, inspiration, and conversations drawn from at the very least Christine Wodkte, Andrea Resmini, Erik Flowers and Daniel Cook.

At this point, you could, If you want, go off and read the three articles, and listen to  the episode of UX Podcast Per Axbom and I recorded based on them, but at a guess, it will take you about 90 minutes – So my recommendation is to finish reading this article first and move on to those after.

I’ll do my best to unpack what’s necessary (for the purposes of this article) from those other pieces, while I add on some thoughts of my own. Hold tight..

In the 2017 article Stephen referenced by Erik Flowers, Three Analogies For the Aggregate Nature of Service Design, Erik uses a video of 1000 people attempting a level in Super Mario Bros. It shows the messy nature of our journeys, and importantly it illustrates how we learn – through learning loops – how to progress.

Loops: Moments of learning where we update our mental models though experience.

To borrow and adapt from Daniel Cook’s 2012 game design article Loops and Arcs, a mental model, leads to an action, performed towards a system, which returns feedback, and the mental model is updated. 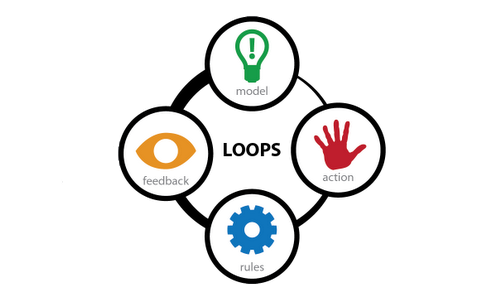 It’s then possible to string together knowledge from previous loops to take us on an arc.

An arc, Daniel says, is “a broken loop that we exit immediately”. The feedback from the loop is the payoff, and once received, we’re done.

”[An arc] could be reading a book or watching a movie. However, the mental model that is updated rarely results in the player returning to the same interaction. The movie is watched. The book consumed.” 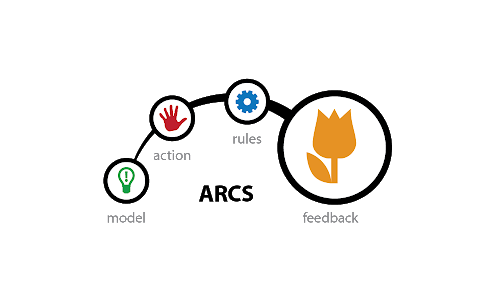 So, at this point, we have arcs and loops making up two elements of service design.

The space that you are exploring, investigating, traversing, experiencing learning loops in, and following arcs, Stephen and Erik have called a terrain. A third element of service design, which is arguably another way of looking at a service blueprints.

“Think of terrain as the environment or ecosystem in which all players play. It’s the sandbox itself. If there’s a national park with dozens of trails (Erik’s example), the terrain is the entire park itself.” 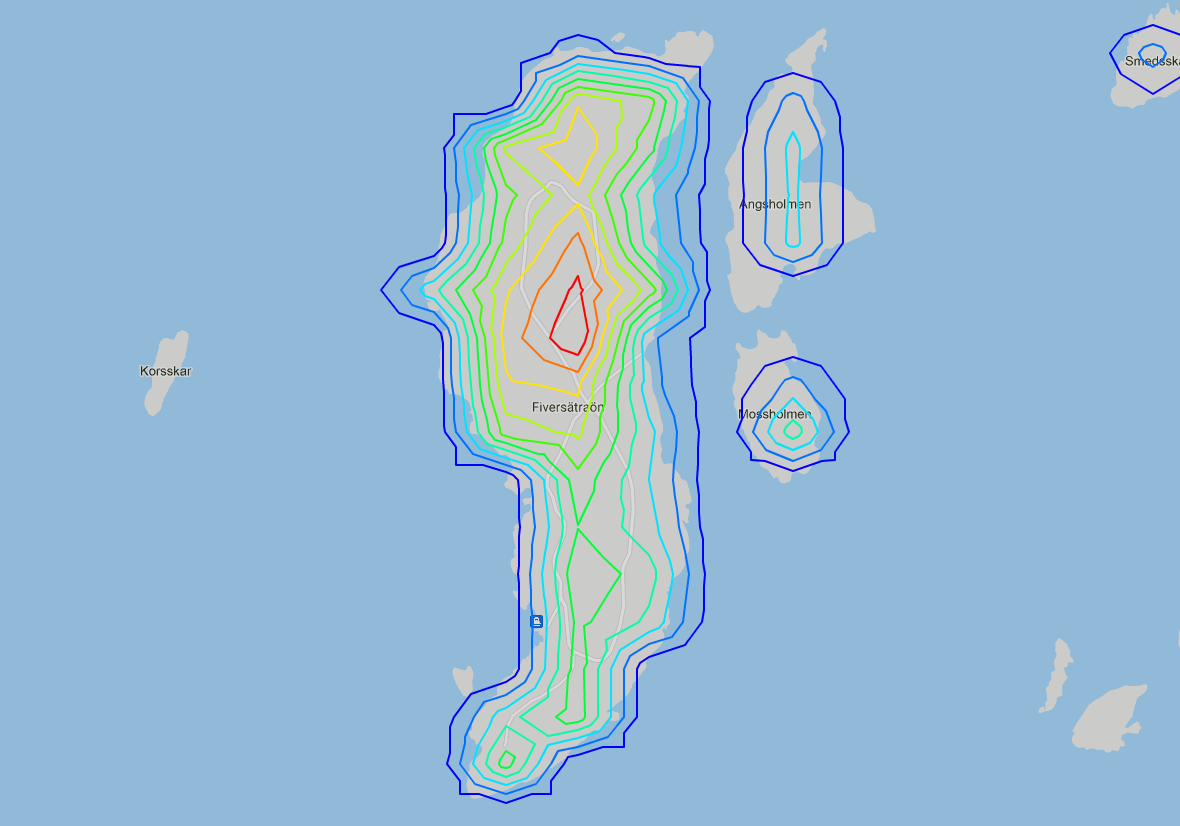 So, cutting to the chase, Stephen and Erik pulled together loops, arcs and terrain and defined how much control (as an organisation, as designers) we have over each of them. We have effectively no control of the individual, whilst at the other end of the scale we have full control over the terrain.

They also included “supply” of arcs and loops (from the terrain and the organisation as the one in control of the terrain) and “demand” for arcs (by the person utilising the terrain).

Stephen describes this as the “money shot” of his article 🙂. 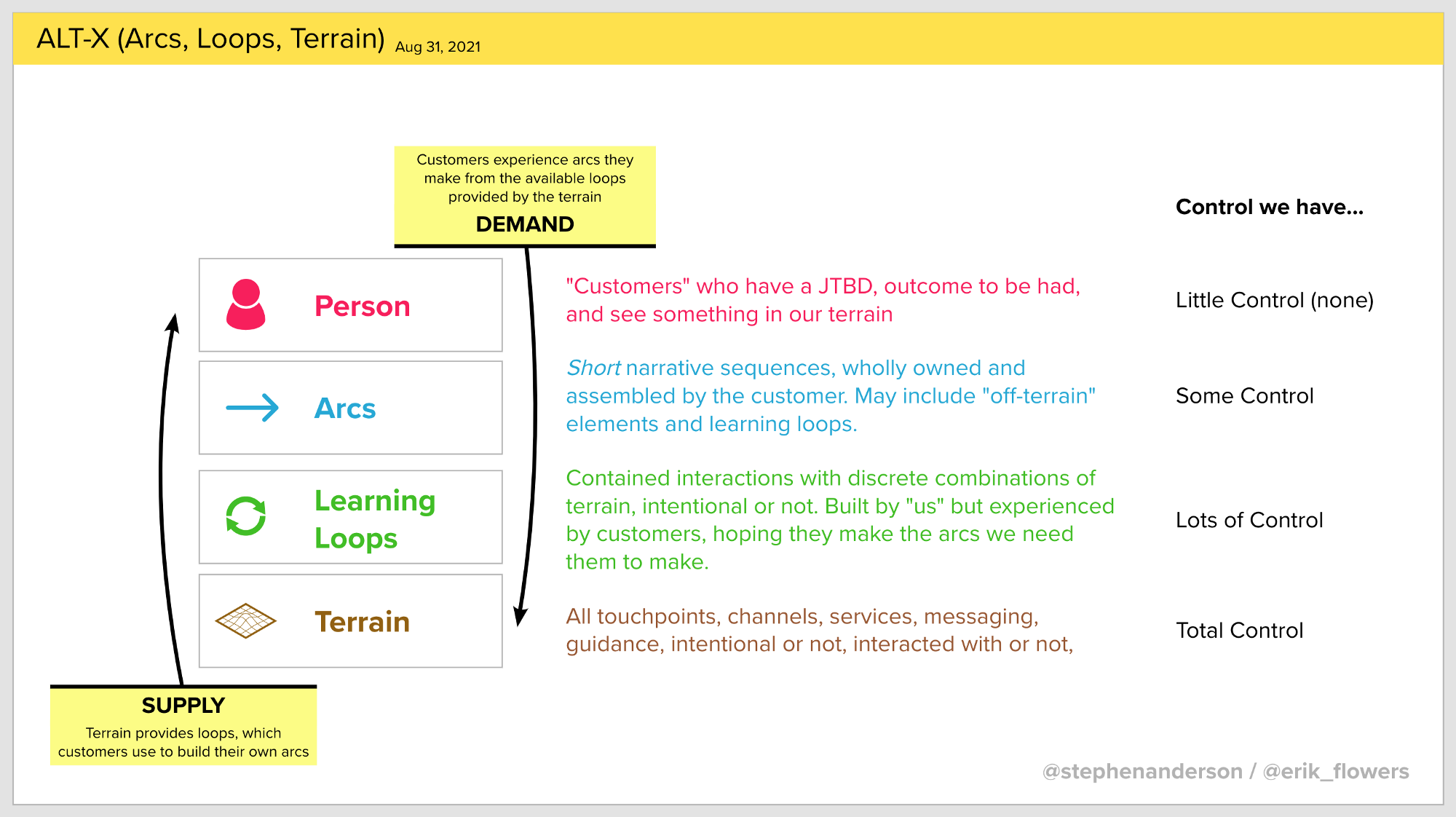 Stephen and Erik’s ALT-X model. Click to open larger and in a new tab.

IMAGE DESCRIPTION: The ALT-X model. People/Customers who have a JTBD, outcome to be had, and see something in our terrain. We have little control (none) over people. Arcs: short narrative sequences wholly owned and assembled by the customer. May include “off-terrain” elements and learning loops. We have some control over arcs. Learning loops: contained with discrete combinations of terrain, international or not. Built by “us” but experienced by customers, hoping they make the arcs we need them to make. We have lots of control over arcs. Terrain: all touchpoints, channels, services, messaging, guidence, intentional or not, interactive with or not. We have total control over terrian. Customers experience arcs they make from the available loops provided by the terrain (Demand). Terrain provides loops, which customers use to build their own arcs (Supply).

The aspect of “control” got me thinking even more. You can control the terrain. You design the terrain. But we don’t have ownership or control over the existing mental models people have when they enter our terrain.

You might well have some experience using Miro, Microsoft Teams, Conceptboard, Google’s Jamboard, or Figma’s Figjam for example.

When you’ve used one, or more, of those products, you will have experienced loops. You will have created or updated your mental modal about how you expect a whiteboard tool to work, and what can be achieved.

Each one of those products has a terrain of its own that has been designed and sculpted by the companies behind each of those tools.

You bring acquired knowledge with you when you enter a new (or different) terrain. Those completed loops (and previously experienced arcs) are not within your organisation’s terrain. They are an inherited state.

Actually, an even more complicated and messy aspect to this is that you can traverse between terrains at any point, update your mental modal, and return to a terrain with a different approach or expectation (this is the equivalent of going off and Googling how you get past a certain point in that Mario Bros level).

So the process of creating and adding a sticky note is something a user will have acquired as domain knowledge. A domain being the space that contains all relevant terrains where loops and arcs have been experienced.

(The whiteboard example comes from the Loops, arcs and terrain, episode of UX Podcast episode that Per Axbom and I recorded, inspired by Stephen’s article).

So let’s add domain as a fourth element to Stephen and Erik’s ALT-X slide and call it CTRL-ALT-D – no? Not funny? 🙃 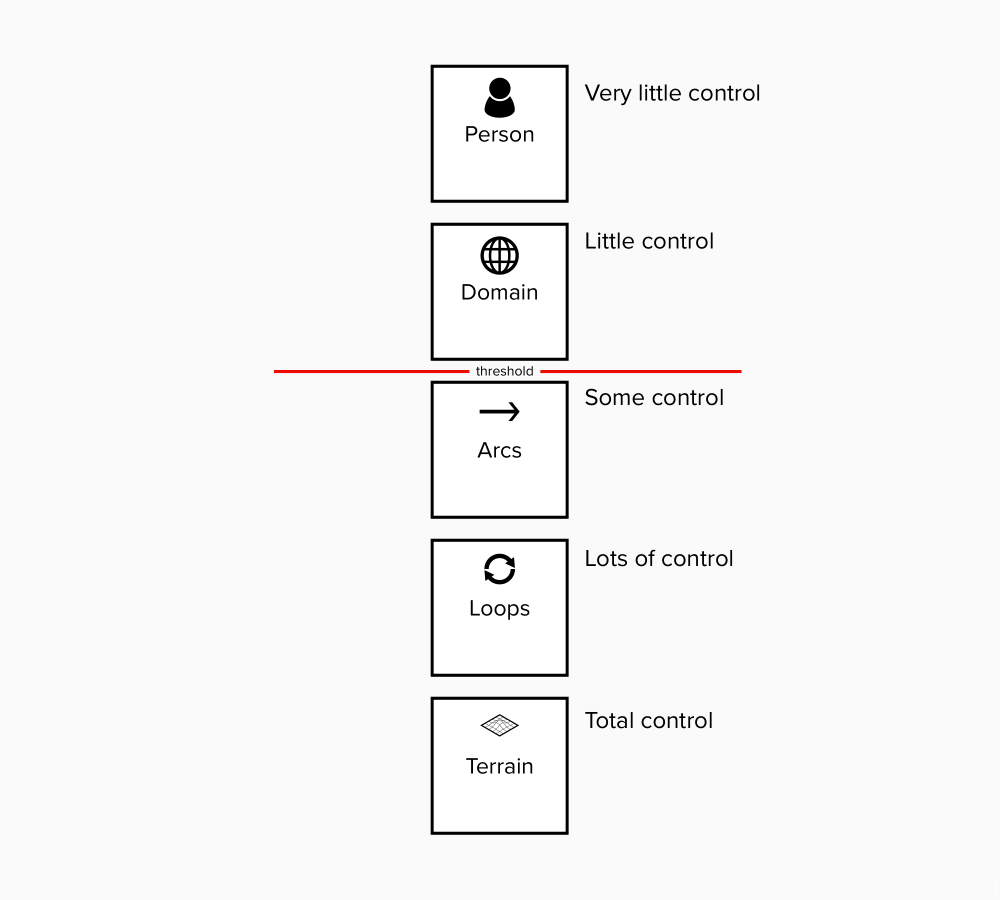 The ALT-X model with threshold and domain added. Click to open larger and in a new tab.

The domain is all the existing experiences and knowledge (from related terrains) the person brings with them into the terrain. We don’t begin our journey with a blank page.

I’ve worked a lot over the years with designing internal tools and enterprise products. It’s not unusual for tenders to explicitly features and behaviour from current tools – completed loops and in effect descriptions of their mental models.

How many times have you heard “like Amazon”, “like Apple” or “like Google” as a designer? People are trying to articulate and reference their current knowledge from other terrains – sharing an insight into their domain.

The demand that exists isn’t for arcs or loops themselves. The individual as a consumer doesn’t care directly about them and doesn’t demand them. They may be necessary, but they aren’t relevant before entering the terrain.

At the point of entry – the threshold – the information available to them (about the terrain) at that moment in time is mapped against their (perceived) needs.

If there’s an equilibrium (between their expectations of the terrain and the task at hand), they enter. If not; they’ll move on and look for a more suitable terrain.

Imagine that our individual is investing in a factory. They want to produce/achieve something, and they need to acquire the means of production to make it happen. Our terrain is their factory. Once they have access to the factory (they’ve invested capital), then can start production (achieving their goals/outcomes/tasks – completing arcs) and their focus turns to how smoothly the factory is run (reflecting on completed arcs).

If the factory turns out to be poorly equipped, or poorly run, then they might abandon it and move on (they withdraw their investment). Or they might decide to invest more into the factory (complete more loops) and optimise production and subsequently improve their return on investment.

So rather than demand and supply, once within the domain it’s a question of capital investment (in the form of intangible assets) and the return on that investment (arcs completed).

This is a two-way investment of capital. Both the organisation and people invest more capital into the terrain.

The person performs more loops, they further utilising the terrain. This is an investment into their knowledge of the terrain based on a belief that it will improve their ability to complete arcs. It results in an increase in their (intangible) assets.

Time to wrap up by updating the diagram a little more.

I’ve replaced the supply and demand labels with “investment” but retained the descriptions that Stephen and Erik had from “supply” and “demand” as they still fit – I’ve just relabelled them. 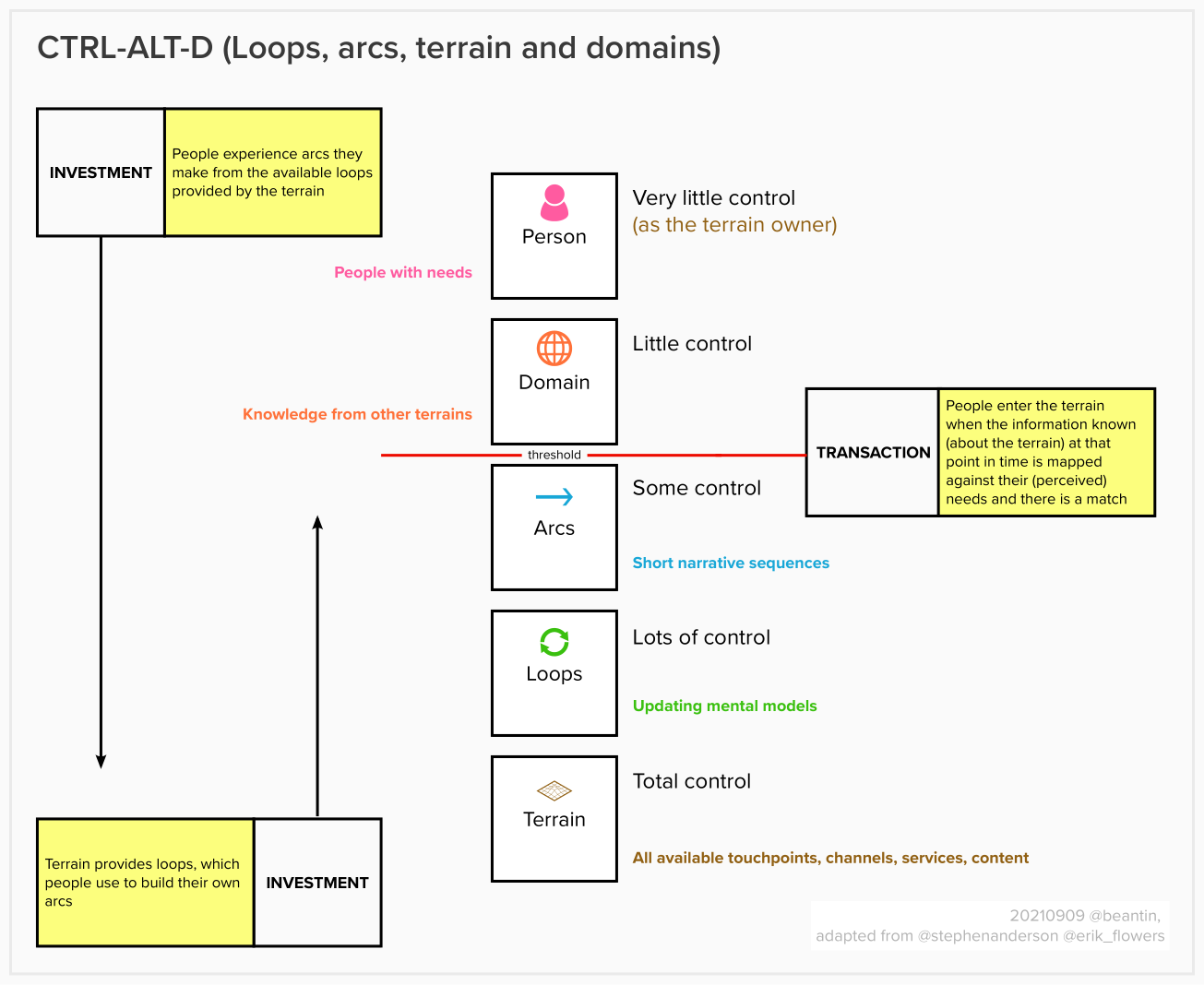 The CTRL-ALT-D model. Click to open larger and in a new tab.

To finish, here’s a brief summary of the main points encompassing the loops, arcs, terrain and domain model.

We are really just facilitating good spaces for people to do the things they need to do, which means understanding both the space and the people in it – and why they those people ended up there in the first place.