Last week I launched The Beantin Index, a site where Swedish websites are graded and ranked!

After a number of months of planning and preparation (as a side-project) The Index has, at last, seen the light of day. 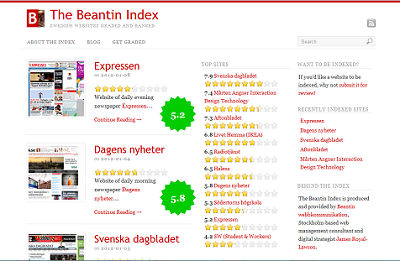 There are plenty of awards handed out to Swedish websites every year, but I felt as if something was missing. I wanted something where I could compare sites; quantify how good they are based on a set of critera.

To create a score that gives an indication of how well a website is managed, how well it complies with various standards and recommendations, and how good it is to use..

The Beantin Index fills that gap.

It’s only the beginning, but I’m intending to add new sites to The Index as often as I can mange. The review process itself takes a couple of hours, then it takes an hour or two to write up, prepare, and publish the final result.

If you’d like your website rated, please get in touch. If you’re a little bit afraid of hanging out your dirty laundry in public, then don’t worry – I can do private ratings (for a small fee), then once you’ve made some improvements I can re-assess the site (for free) and add it to The Beantin Index.

I hope you find The Beantin Index both interesting and useful.

Digital products and services are a gathering point for pretty much everything we’ve ever learnt. There is a never-ending list of different specialities that need to be utilised to produce the seemingly mythical perfect digital experience.

Those of us working with digital design work in a rapidly changing sector. Yes, we’re maturing as a profession, but the sheer vastness of what we are trying to learn, understand, and manipulate – combined with the speed of change, means that maturity isn’t something that will arrive over-night.

Human beings love compartmentalising things. So do organisations. Unfortunately that doesn’t work with digital design. You can’t work in silos. Each speciality can’t sit in it’s silo and produce the optimal result without genuine co-operation and co-ordination with other specialities.

One of the biggest problems is that many of these silos don’t realise that the other silos exist let alone the benfit they bring and the importance they carry. That’s understandable. A specialist programmer isn’t going to be a specialist copywriter. Your marketing department isn’t your finance department. You aren’t expected to know the details of how the other professional/department/silo goes about it’s business.

True collaboration, across organisations and with the people who will use what we create is essential for us to get the most out this fantastic medium we work with, and prevent people suffering harm.

Here is my 6 point manifesto that I will follow to help join the dots, get specialities working together, and ultimately make a better digital world:

James Royal-Lawson is an independent designer and podcaster based in Stockholm Sweden.

It’s not actually possible to upload new versions and “update” a video clip on YouTube. As someone who helps managers a number of websites for various clients, it’s not unusual for me to receive an email that says “Can you remove from our YouTube account. We’ve got a new version to replace it”.

The problem is that your original video has become a social content. When you posted it, it became alive. People starting viewing it, commenting on it, liking it, sharing it, embedding it.

Deleting the video ends its life. You break links, you remove comments, you will even lose some “video juice” as YouTube uses number of video (and channel) views as part of its ranking algorithm – you other videos could appear lower down in search results as a result of deleting.

What should you do?

Deleting content always has an impact, so most of the time you want to avoid it. Especially so in cases like YouTube where you have no control over where deleted pages redirect to.

Here are my best practice tips for updating a video:

Why is that best practice?

By following the above best practice you don’t lose your total “views” or the position of that video in search results. At the same time you provide useful and relevant information to people who happen to view the old video clip – you give them a link to a newer version. You’ve helped them. You’ve used the ecosystem of the web in a much better way than just deleting the old, out of date, video.

There’s an announcement. Twitter is alive with tweets proclaiming this wonderful new feature. It’s going to be massive. The next big thing. Bloggers have already implemented it on their WordPress sites. The social media sites have too. Few days later an iPhone app appears. It gets thousands of downloads from the app store.

You have a meeting and talk about how wonderful it would be to do the same. You all agree. You get the responsibility to investigate the possibility further. A week later you’ve gathered enough background information to make a decent presentation to use in your work to get internal buy-in from key stakeholders. two months later, after 8 meetings with the stakeholders plus a telephone conference with the IT department and their preferred supplier, you get the go-ahead to produce a specification.

This year’s budget has already been blown by the marketing department on a flash-based campaign that received no visitors, so when the quote comes back from your IT department’s preferred supplier telling you how much this new feature is going to cost to implement in your WCMS, you realise that it’s going to have to wait until January.

January comes, the proposal gets accepted, work gets underway. Of course the work run over budget and behind schedule. This means that you missed that month’s maintenance slot. The next available slot when IT can fit it in is the next-but-one maintenance window as the activities planned for the next one are critical ones that IT say can’t be mixed with other, “non-essential”, work.

10 months later the feature has finally made the light of day. Of course by this point, the bloggers and various other social media news sites are on their third iteraton, and have implemented a whole load of other features and adjustments that enhance their visitor’s experience.

A tall story? or does your neck ache from nodding in agreement?

Take the launch of Google Buzz. Within a matter of days, Mashable had implemented a Buzz Button of their own. They’re a company of 30 or so employees, and a have a website that gets over 20 million page views a month. Yet they have kept their web presence fluid enough so they can react and adapt their tactics at a pace that fits today’s real-time web.

Your organisation needs to leave the website redesign cycle behind it and adopt a solid web strategy that then gives you the opportunity to measure, and then adjust your tactics. Your web presence doesn’t stop and wait for you to go through a full website redesign and rebuild. Don’t let yourself get stuck – but It’s not a Las Vegas casino you can knock-down and start again from scratch. It’s closer to a living person. You need to be its personal coach, doctor & surgeon.

I’m going to side-step the debate of whether this is a good or bad thing to do from a branding perspective, but instead use it as an example of what impact it has on your web presence.

Anders was sensible enough to create another twitter account which he used to grab his original name of CityRat59 as soon as he changed the name to AndersSporring – but, this process creates an awful lot of 404s. In fact, it creates a “page not found” for all the URLs to every single tweet you’ve tweeted until the moment you changed name. In Anders’s case, this was thousands.

Twitter basically switches your usename in the URL, with makes no attempt to redirect any of the old URLs with a 301. The replies are relinked to the new profile; which maintains the thread from a twitter perspective, albeit a little confusing due to the mix of old profile name and new.

It’s not only old tweets that give “page not found”. All your lists and favourites will also change URL with no redirect. Take Anders’s “Social media club Sweden” list. It’s original URL is still indexed by Google (at the tme of writing), but of course gives a 404. Google hasn’t been told that the list has a new URL.

The conclusion? Changing twitter name is very similar to changing domain name; but without any control over redirects. If you have an established Twitter account with a long history of tweets (and perhaps a large number of followers) then you will end up with thousands of broken links and related content that has been indexed by search engines and various twitter-related sites.

My advice would be to think carefully about what Twitter name to adopt when you first join, and then think even more carefully before changing it at any point – Changing Twitter name has a wider reaching impact than you may have initially realised.

It would appear that Twitter have sorted out most of the redirect problems that used to exist when changing Twitter name. Niklas Wikman changed Twitter name recently and wrote up his experience (in Swedish). Conversions are maintained (the threading changes name, but the username contained within the actual tweet remains the same) and Twitter is creating redirects for all of your old tweets. Changing Twitter name doesn’t seem to be at all the nightmare it once was.